How can mining costs be reduced as bitcoin prices plummet?Solar power seems to have the answer.

Recently, Alex DE Vries, a researcher at PwC in the Netherlands who studied bitcoin's global energy consumption in 2018, found that existing hydropower projects were not enough to sustain bitcoin mining operations, adding that the bitcoin network requires up to 62.3 TWh (62.3 terawatts per hour) of electricity. That could be enough to power Hungary or Switzerland.

Alex's findings are part of a long-running debate over whether bitcoin is bad for the environment. Bitcoin skeptics accuse decentralized financial networks of contributing to global warming because every node in the system needs electricity to maintain it, meaning machines need to handle the math -- by injecting massive amounts of computing power -- to eventually dig up and confirm bitcoin transactions on the network. As a result, the entire bitcoin mining operation generates a lot of heat and increases the demand for electricity from power plants.

Supporters, on the other hand, argue that the traditional banking system that bitcoin is designed to replace consumes more resources. As they say, Banks use environmentally unfriendly chemicals to print money, and many of their local offices and server warehouses use a lot of electricity and so on.

Alex is clearly a bitcoin skeptic. The blockchain researcher wrote in his article that bitcoin miners consume 12,000 times more resources than the biggest carbon footprint the banking industry has when processing transactions. He also said that while bitcoin supporters are turning to renewable energy, it doesn't address the problem properly.

Alex also said that even if the bitcoin mining business shifts from fossil fuels to renewable energy, it will continue to consume energy. Alex cites hydropower stations in China's Sichuan province, which generate three times as much electricity in the wet summer as in the dry winter. But since cryptocurrency mining operations don't shut down until they become profitable, the power stations also need to use coal energy to meet miners' mining needs. Alex said in the article: "based on these findings, the current use of renewable energy in bitcoin mining cannot be considered 'green' results, and the challenges posed by ongoing energy demand and the variability of renewable energy production will remain. This may even encourage the emergence of new coal-fired power stations to meet higher energy demand.

The research is fundamentally flawed

Eric Masanet, an energy modeler at Northwestern University, says most bitcoin/global warming research is seriously flawed. Eric said the global power industry is taking large-scale measures to achieve decarbonization. He argues that the fact that a policy-driven reduction in fossil power supplies will eventually prompt bitcoin mining equipment to rely on green electricity should not be overlooked.

Above, Dan Held, co-founder of Interchange, a cryptocurrency asset management platform, tweeted that # bitcoin USES electricity that is several orders of magnitude less than the current cryptocurrency system.

Since the advent of bitcoin (BTC), cryptocurrency miners have been working to reduce the cost of mining. The shift has become increasingly important at a time when the cryptocurrency market is still in its frostbite.

As a result, some miners are now using solar energy to run equipment to dig their mines. Reddit user "cadese", for example, claims he is using solar panels to dig for minerals, which significantly reduces its mining costs (see chart below). 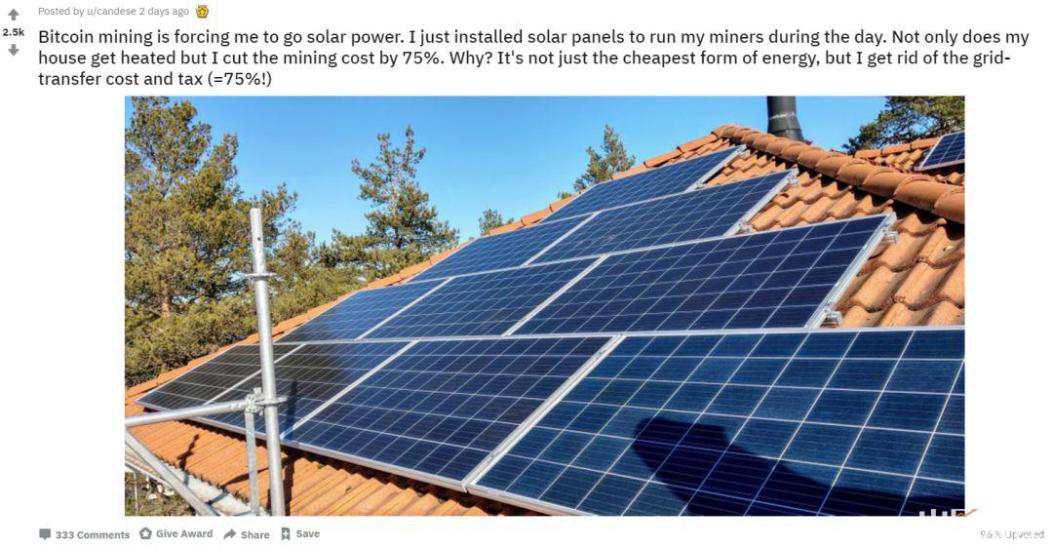 Bitcoin mining is forcing me to use solar power, the user said. I just installed solar panels to run my miner. Not only did my house have access to this electricity, but it also reduced my mining costs by 75%. Why is that? Not only is it the cheapest energy, but I get rid of grid transmission costs and taxes (= 75%!).

Solar panels are more cost-effective than standard electricity. For example, the manufacturer of the mining equipment Azultec Cube300 claims that miners can choose to "use renewable energy and recover up to 72% of the heat generated" by mining. For small-scale miners, more and more mining methods are available. For example, the main goal of the Cryptosolartech project is to develop into the largest cryptocurrency mine using renewable energy."At Cryptosolartech, with the best equipment and technology on the market, we rely on 3,000 to compete with large mining pools," Cryptosolartech wrote.

In the solar power project for digital currency absenteeism, we take into account that, except for equipment failure and regular maintenance, all the equipment is in a 24-hour working state. Use area often is in devious (land price is cheap, use electricity cheap) area. In order to ensure the stable operation of the equipment for a long time, the plan adopts the grid-connected mode. During the day, the solar panel relies on strong sunlight to provide sufficient power for the operation of the "miner".And the humanization joins the solar energy furniture equipment plan. Alleviate the impact of high temperature on operation and maintenance personnel, reduce the difficulty of living in a harsh environment, and improve work efficiency.

Stability is the prerequisite for efficiency. Choose high-quality solar panels to ensure 30 years of use. Configure the energy storage system according to the actual situation, and store enough power for supply during the day