2018 has been a tough year for the U.S. solar industry, with the trump administration's 201 tariffs wreaking havoc on utility-scale photovoltaic projects and contributing to a midyear economic slump. However, the us solar market insight report, jointly released by the research group Wood Mackenzie Power and the renewable energy industrial solar association, shows that the installed capacity of PV in the last three months of 2018 was 4.2GW, with an increase of 10.6GW for the whole year, only 2% lower than that in 2017.

That suggests the solar market is making a comeback. Even better, under the power contract, the US will complete nearly 24GW of utility-scale PV projects this year, of which 2.6gw is already under construction. The rebound in the housing market was compared to 2017, with a decline in the size of utilities and non-residential photovoltaic projects such as commercial, industrial and government projects.

In some states, such as Massachusetts, where the decline in the non-residential market was driven by policy changes, waiting for a renewable energy target led to a 64 percent year-on-year fall in installed capacity. However, the housing market is "the only one with a good view", with 2.4gw of new installations completed, an increase of 7% compared with 2017, though not yet back to 2016 levels. Arizona, New Jersey, and New York are still in the dollies, but California has returned to nearly 1GW, and Florida is the fifth-biggest residential market. 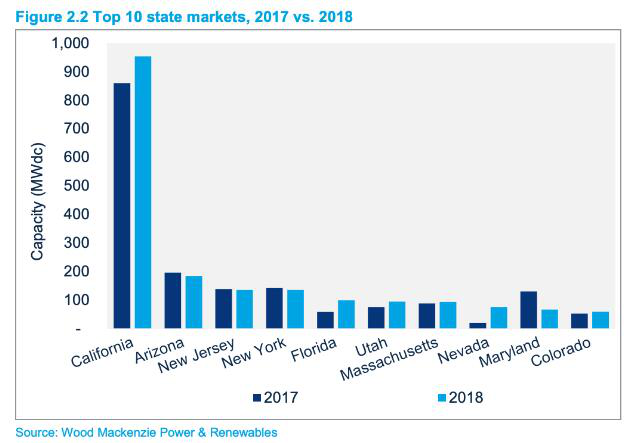 Of course, the recovery does not mean all is well for home installers, especially when it comes to customer acquisition."Higher customer acquisition costs will challenge innovation in the industry as key markets continue to grow, outpacing early adopters."

The report noted that natural gas dominates new capacity Solar accounts for 29 percent of new U.S. electricity generation and wind for 16 percent, according to an estimate by Solar Market Insight. For the first time since 2013, solar and wind did not account for most of the new capacity instead, 2018 was a record year for natural gas construction.

FERC's Energy Infrastructure Update estimates new gas capacity at 20GW, while the Energy Information Agency of us Department of Energy puts it at 19.3gw and retired gas at 4.7gw. Many of the new gas plants are on the east coast, Midwest and south. Natural gas has largely replaced the 12.9 GW of decomposed coal plants estimated for the year. Rising star states rank in installed capacity: outside of California, the big winner this year was Texas, which jumped from fourth place in 2017 to second place last year, adding nearly 1GW. Texas passed North Carolina, which fell one place to third, and Florida, Nevada, New York, New Jersey, Minnesota, Arizona, and Massachusetts also made the top 10. 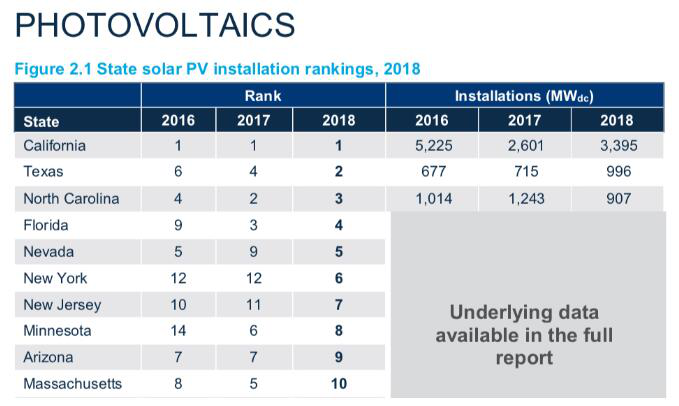 Texas has huge potential this year. Grid operators are reported to have approved more than five get projects, all expected to come online in the next three years. Wood Mackenzie expects solar installations to reach about 12GW this year and rise to nearly 16GW in 2021.